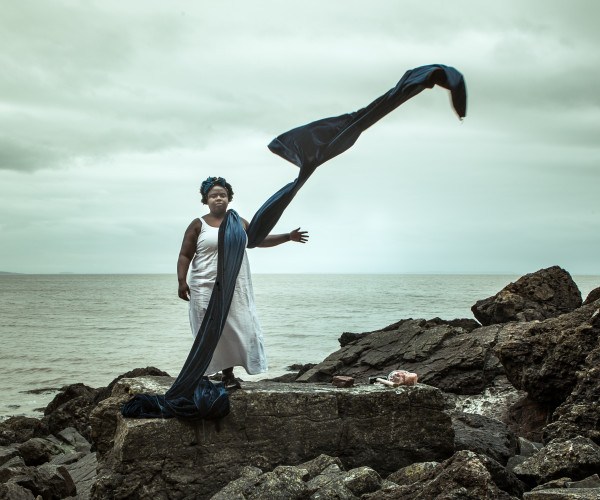 “If the group of those in society most disenfranchised by the current political system were to run the country, how different would it look? What would we learn?”

Selina Thompson, a performance artist and theatre-maker from Leeds, has been working to redefine what it means for marginalised bodies to take up space and share their stories on stage. Her body of work attempts to explore and tackle different aspects of modern life; her series Edible Women focuses on the complex relationship with food, dieting and the obsession with editing the female body.

As Wide And As Deep As The Sea is the exploration of black british identity, where her award winning one woman play Salt sits, as one of the most fascinating and thought provoking pieces of theatre of the last few years- Lyn Gardner in her review said: “this is a piece that offers the gift of seeing the world through different eyes”. She tackled work and unemployment in her series The Job Centre Project in a way that is relatable to the british working class experience.

Now just before she embarks on a new project Sortition which explores the ennui which comes along with elections and the lack of interest in voting, we had a chat with Selina about her process, projects and how the idea for Sortition came about.

gal-dem: Your previous work has explored topics ranging from relationships with food, to black female identity, to unemployment. Do you always envision your individual pieces as something from a larger body of work or is it more complex than that?

Selena: So I think that my thinking is very chaotic, and that a lot of the art-making process for me is trying to organise that chaos into something coherent. So the organising of individual pieces into larger bodies of work is a part of that.

It also helps with funding bids if I’m being completely honest — the clearer and longer-term you can be about your work, the more likely you are to get longer-term funding bids. It’s much more of an archival and logistic choice than an artistic one. It’s neater on the website, the work becomes more legible. But most artists work in this way, I think, there is a through-line to their work, or preoccupations that they keep returning to.

That being said, thinking in this way also takes the pressure off your smaller pieces of work to do everything. You can make a series of works on blackness and know that each piece needn’t hold it all — that you can go deeper into different elements as and when you need to.

Your work tends to have a lot of physical manifestations of some part of your artistry and identity. For example you came out on stage in a giant ball of hair, you hacked at an actual piece of rock salt etc… how does this influence your audience interaction, if at all?

Every single element of a piece of work influences how you interact with audience. I come from a live art practice, so I want images that are visceral and ambivalent and are articulating the things that there isn’t language for. The materials you use are the terms of engagement.

The two examples that you give are also both really, really different; the tumbleweave is this soft, outsize, larger than life thing that transforms the space, it is an object that audiences actively interact with, touch, sit inside, peer through, and have bits tangled up in their clothes when they leave. It makes the space more playful and more open to exploration. The tumbleweave is what eliminates the fourth wall for that piece.

Salt, and the piece of rock salt is very different — it is an end on piece, the rock is a prop and part of a ritual, it makes the space somewhere that the audience can very clearly not enter, as the space is dangerous, and there’s rock salt flying everywhere and people have goggles.

But those choices are not made to define audience interaction — they’re made because I hope that they’re what communicates what I want to say most clearly.

Your new project Sortition is all about young people who have never voted. Where did this idea come from?

These guys, after Theresa May called a snap general election. Brenda (the first woman in that clip) articulated how I felt when I heard we were going to have another election, and I thought this moment — this fatigue with voting was so interesting.

Sortition is actually about…sortition! It’s a process of selecting members of the general population at random to form governments. Think using jury service, but to put Parliament together.

I was asked in April of last year to think of a proposal for 14-18 NOW that celebrated the suffragettes and the people’s representation act 100 years on. But Theresa May had just announced a new election, a load of the suffragettes were racist (yes, even in the UK — Norah Elam, Mary Richardson, Mary Sophia Allen — once they had suffrage, many of them were the driving forces of the British Union of Fascists) and I was aware that some of the most politicised people I knew, who were engaged in antifa work, who protested and organised and campaigned had no interest or faith in electoral politics.

I did not want to celebrate representational democracy — which in the west is so often shorthand for elections — when so much about how they are campaigned for and won feels to the detriment of the electorate at large, when so much of how we get people to vote feels manipulative and coercive. So instead I wanted to look at alternative methods of democracy — to use the idea and theory of sortition as a check of the political health of the electorate. If the group of those in society most disenfranchised by the current political system were to run the country, how different would it look? What would we learn?

The focus on young people came from the commissioners — I’m actually really interested in people who have lived through multiple elections and still don’t vote, I think it’s a really interesting perspective — but maybe I’ll save that for another, different piece.

And finally, what advice would you give young women artists that you wish you had been given early in your career?

I was really blessed with good advice when I started out, I don’t look back on that time as lacking.

All advice is autobiographical. So take a really good, long, hard look at who you’re getting advice from, and figure out if their life and their work is actually something you want to emulate. Especially if it’s free advice. Why is it so cheap?

“Take weekends off if and when you can. It really, really matters”

The best thing to do is to make your own mistakes, to learn by doing. You’ll never forget those lessons and you will learn what truly matters to you — other people’s priorities and values are not the same as yours. Again, take caution when taking on board advice.

Take weekends off if and when you can. It really, really matters.

There is no shame in always having a day job running parallel to your artistic practice. Sometimes it can be a strength, giving you perspective, not leaving you subject to the whims of a very fickle and messed up industry.

Art ebbs and flows. Sometimes you’ll be working pedal to the floor, super hard, other times, you eek out a half hour, and that’s all you’ve got. That’s ok.

Sortition will be playing at the Arnolfini in Bristol from the 26 September – 6 October 2018.

For more information on Selina’s past and future work, check out her website.

This interview originally appeared on Gal-dem.com.